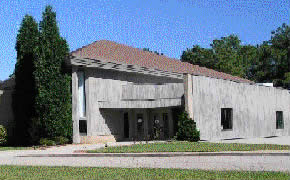 I got a call from a church down in South Carolina, needing some help with their sound system.
So, I hopped in the jeep and buzzed down there on Sunday.
It was a two and a half hour drive, so I left around 7:30 am and made it for the first service.
This is my second visit to this church to help out with sound. The first visit went well, and they took my recommendations to replace their old Peavey stage monitors and replace them with some Mackie SRM 450's. So, this trip was to help them install them and also to install a DBX compressor that they bought on my last recommendation.
The service kicks off, and it is so loud, your ears are going to bleed. The band is comprised of a set of Yamaha electric drums, a Bass Guitar, Acoustic Guitar, Piano, Electronic Keyboard, two Trumpets, and a Viola. The band is accompanied by 4 back up singers as well.
I looked over the sound guy's shoulder and saw what the problem was. He had the mid-range EQ's on almost every channel pumped up about 6 Db. Combine that with the Trumpeters blasting their horns so much that you could see their heads turning red, and you can see right away that this is not going to be an easy fix.
The Sound guy is such a nice guy and he really wants to learn. He only does audio once a week for the church and has no one around to teach him. So, he is taking notes on everything we do, so hopefully he is going to be able to retain a good percentage of the things we did and why we did them.
The PA speakers are also a big part of the issue. They are two small boxes mounted in the pinnacle of the roof and one, 18" subwoofer that has been custom fit under the communion table. The mains look like they have about a 12" speaker in them, and I believe the pastor said they were installed in 1990.
After the service, we went to lunch and talked a little bit about what was going on.. then back to the church to install the Mackies. The old Peavey monitors were just so crappy sounding that in order to hear anything, you had to crank them way up and then the stage volume was greater than the mains volume. With the Mackies in place, we were able to bring the stage volume way lower and clean up the main sound.
I looked into the way the Mains and the subs were wired, and found that the amp was bridged mono, and the Subwoofer was getting the main feed.
So, everything in the system was going to the Subwoofer, and that was receiving a full range signal. no wonder the Sound guy had so much mid EQ turned up. The subwoofer was pushing everything out with low-mid mud!
I re-wired the Amp and fed the Subwoofer a feed from an Aux send, and then flattened the main EQ, and re-EQ'd everything. This made a tremendous difference. The Amp was now running a lot more efficiently because it wasn't taking up all that power to push every signal to the Subwoofer.
Then the Band came in for rehearsal and everything cleaned up quite nicely.
They are still going to have to work toward investing in new mains, subs, and amps. but at least the equipment that they do own is working the best it can for them.
Posted by Steve LaRose at 6:33 AM